Share the post "The 21st Century Company – And You — Iteration / Innovation / Progress! And the Now Very Familiar… Disruption!"

Theme-setting Comments at the Skytop Strategies’ “21st Century Company” conference, early-November 2017 in New York City. This was my third time opening the conference to set the theme of the day…

There are three words that I think define the concept of these 21st Century Company gatherings. The approach was conceived more than three years ago over lunch with Chris Skroupa, my partner Lou Coppola and I. And the words keep ringing true ever since.

The first word is Iteration — from the ancient Latin: again…and again…and again. Science and Discovery is about iteration — it is the basis of our scientific theory and practical application of scientific advances. We hear these days about “science-based” and “evidence-based” progress being made. At least from most of us.

The second word is Innovation — also from the Old Latin — the new. Something, everything — new. Most of us are interested in the new; some are anxious, others enthusiastic.

The third word is Progress — also from the Latin roots and with us with the same meaning for many centuries — it is the story of humanity — forward! Moving forward.

Interation / Innovation / Progress. Think of the great inventions of the later years of the late 18th and 19th Centuries that made the 20th Century so very different in so many ways in our personal and business lives. In finance — in public and private governance — and other aspects of our lives.

Our lives in Century 20 were very different from the experiences of generations before us. And will be in Century 21 thanks to the great progress of prior decades.

We can see all of this at work in these Inventions.

First, Electricity – the “Dynamo” (as it was called) that harnessed the power and changed nighttime dark to daylight at any time!

Telegraphy, the Wireless and Telephony….over time leading to the broad-bands of our internet and our cell phone. Everything is powered by electricity.

And the internal combustion engine – providing reliable, portable, movable power — today, cars & trucks and airplanes on the move dominate our lives, don’t they? Speaking of the last….

In the early 20th Century, The Great Tinkerer, Henry Ford brought together many scientific advances in glass, metallurgy and development of materials such as plastics, instrumentation, rubber for tires, the internal combustion engine…and more… to mass produce cars & trucks.

Henry Ford invented the efficient modern factory with his idea of bringing the work to the worker. His advances in the innovations related to motor cars brought about great progress. He was also a…farmboy at heart.

And thanks to the farmboy in him — Ford Motor Company has been making certain parts out of soybeans. This is both a 20th Century and 21st Century story.

Founder Henry Ford planted 6,000 acres of soy on the company farms. In the 1930’s he worked with soybeans to develop early versions of plastics, paints, and other products familiar to us today.

He actually made very sturdy car fenders out of soybeans and was photographed banging on such a fender with a sledgehammer — more than 70 years ago. Those old, collectible brown Ford stick gearshift knobs? Oh, yes — they are a soybean extraction! 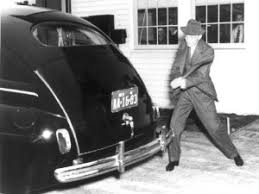 Henry-the-Tinkerer pounding away at a fender made of soy — he wanted to make a whole vehicle out of the wondrous plant!

One thing he invented in his laboratory for us to use every summer — the charcoal briquette. This came out of his “Industrialized Barn Concept,” his idea that future farmers might use their barn for production in the cold winter months!

And now to 2017 — in mid-October, Ford Motor Company celebrated the 10-year anniversary of using soybean-based-foam in its car seats. That practice saved 228 million pounds of CO2 from entering the atmosphere — equivalent to CO2 consumed by 4 million trees in sequestering carbon emissions.

You can see the soybean seats in Ford Mustangs of the last 10 model years. More than 18 million vehicles produced in North America have soy-derived foam seats, proudly notes Great-Grandson / Ford Chair William Ford – an MIT grad. And he is Great-Grandson as well of Harvey Firestone, the rubber tire innovator. And he drives a Mustang with soy seats. And Firestone tires!

Photo:  William Ford, Chair of the Ford Motor Company with a Mustang — with soybean seats!  20th Century meet the 21st in technology!

Tinkerin’ away: The Ford Company’s lab tinkers today with such materials as wheat straw; rice hulls; trees; coconut; kenaf; tomato peels; chopped up US dollars; dandelions; algae; agave…you know, the stuff of tequila! The derived materials may be going into tires and gaskets.

That is truly 21st Century Corporate Sustainability in action!

The Spirit of Old Henry-the-Tinkerer & Innovator lives on. As does the Spirit of Thomas Edison. And Alexander Graham Bell. And many other tinkerers.

This is for us clear demonstration of the spirit at the heart of science, of scientific discovery…and of Innovation. And the outcome: the Progress we make!

Another great 19th Century invention I mentioned was the harnessing of Electricity: This new power source drove wired transmissions; think of the telegraph as electrons whizzing through wires to carry dots & dashes. Then telephony evolved with voice-over-wire; then came electrons driving radio waves, then television waves, then wireless telephones. What comes next?

Think about the little and very powerful cell phone, our wire-less telephone that we take for granted — we carry the device around and depend on it for many things every day. The amount of processing power far exceed the capacities available to “tinkerers” like the early space astronauts in their space-borne vehicles.

Speaking of Innovation and Interation…remember Radio Shack? Kids-in-the-garage of Silicon Valley invention fame shopped at Radio Shack for parts — the Steves, Jobs and Wozniak of Apple fame. Radio Shack is gone. Apple thrives. There is great irony here for us…

The fourth word for us to keep in mind for the 21st Century is very important: Disruption.

This is the process in our Capitalistic society of industrial mutation that incessantly revolutionizes the economic structure from within, destroying the old / creating a new structure.

This was before the debut of the World Wide Web (in 1994, by tinkerer Tim Berners-Lee), tiny cellular phones and other goodies in our lives that we take for granted today.

To explore the pace of innovation / and the resulting disruption – and the impact on our everyday lives, please do think about right now:

And all of those electronic miracles of 26 years ago are right here in the 4-oz Apple iPhone! At in one hand, at a fraction of the price, all portable, all in your pocket.

Think about the progress that is made, step-by-step, an iteration or discovery (one at a time), that lead us to miracles in our lifetime. There is such an exciting future ahead for the Millennial Generation, isn’t there.

I’ll leave it here for now. We will be exploring all through our day together the marvels and miracles — and hard work — that leads us to ….

This is what the 21st Century will be all about.