In this space I often suggest you “tune in” – and that’s what my commentary is about today.  Ken Burns, documentarian extraordinaire, brings us a new PBS series that educates, informs, entertains, opens our minds. This is his focus on the key Roosevelt larger-than-life family members — Teddy, Franklin, Eleanor…and some others of the clan (such as the outrageous and entertaining daughter of Teddy, Alice).

The Roosevelts, descendants of early Dutch settlers of what is now New York City (“New Amsterdam”) and New York State, made their fortune in real estate, trading and other businesses. New York City was a business town, and the early family members were very good business people. (A key ancestor bought up Manhattan Island farmland when his neighbors suffered through periodic economic downturns.) The early days’ fortune built enabled later generations to devote their lives to public service while trust funds flowed to support them and their families.

Theodore Roosevelt, Jr. (1858-1919) shaped the modern presidency during his 8 years in the White House (which he named; it was the “President’s House” before). He created our modern navy, the foundation for our national parks system, led the campaign to eliminate child labor and (for) “pure” food and drugs…and more.

He was elected VP in 1900, at the dawn of the 20th Century, and left the office in 1909, after serving a full term of his own and almost four years of the presidency he moved into after the assassination of President William McKinley. “Now that damned cowboy is in the White House,” his party leader supposedly exclaimed. He was a cowboy and a lot more.

His younger cousin, Franklin Delano Roosevelt (1882-1945) was elected governor of New York (as was Teddy), and won the 1932 presidential election as the country slid deeper and deeper in to the Great Depression. Our American democracy seemed at risk; one of every four households had no income; fascist leaders rose to power in Europe and Japan.  He mastered the use of “radio” and urged his countrymen on to meet the great challenges of the day.

He led the country as Commander-in-Chief in the darkest years of the first half of the 20th Century, during World War II, and was “The Soldier of Freedom” (as described by historian James MacGregor Burns), leading the 15 or so “united nations” that opposed the regimes of Germany’s Nazi conquerors and Japan’s war cabinet. He dreamed of today’s United Nations and paved the way for that organization to be created just months after his death.

His wife, First Lady Eleanor Roosevelt (1884-1962), was Teddy Roosevelt’s brother’s daughter; longest-servicing First Lady, moving out of her shell, she became one of the most admired women of her time, both in the US and around the world. She was on point fighting the good fight for civil rights, women’s rights, and other causes. She was ambassador to the United Nations and one of the most popular commentators (newspaper columns) in the country after she left the White House.

As described in the headline, a remarkable and fascinating family of political, social and cultural progressives.

Do tune in to the series on your local PBS station; do buy the book and DVDs of the series; do think about the brand of leadership displayed by all three Roosevelts…and what they might have done if they were confronted with the issues facing our country, in our time.

Both President Teddy (#26) and President FDR (#32) through their strategies, policies, actions, commanding rhetoric, shaped the nation for decades after their White House years…and continue to shape our world today.

I live near to Theodore Roosevelt’s home – Sagamore Hill, in Oyster Bay, New York — and visit the home (a national park museum) from time -to-time. I find his progressivism inspiring.

If you would like to know more about how TR’s actions continue to shape our world, and our business environment, you can read my July 2011 commentary in Corporate Finance Review (Thomson-Reuters) — “Teddy Roosevelt and the Creation of the Modern Presidency — With Focus on Large Corporations and Corporate Behavior.”

One of my treasured media/publishing colleagues is Morgen Witzel, who is among the most prolific of business writers.  He’s been editor of the Thomson Reuters journal, Corporate Finance Review, for about 15 years. (For the past dozen years at his invitation when Enron was collapsing I have been the corporate governance and corporate sustainability contributing editor so he is my editor as well.)

Morgen writes solid business books that I find very helpful. We share an interest in business history and historical and influential figures in business affairs (like the late Peter Drucker).  Recently, Morgen authored a book about Tata, the multinational industrial giant of India.  Now he has a new book out — Management for the Masters, “from Confucius to Warren Buffett, 20 timeless principles for management.”

I asked Morgen what his thoughts were as he was researching and writing his latest work…what were the timeless insights and long-lived wisdom that he learned and that I could share you with, dear reader.

“Management from the Masters is a distillation of timeless principles that govern business today. These principles are gleaned from the ‘masters’, those wise individuals whose ideas remain as relevant today as ever – and will continue to be relevant through all our tomorrows.

“Some of the masters are respected business gurus. W. Edwards Deming, the master of quality, knew that quality is not just a bolt-on, it is one of the fundamental purposes of business. Peter Drucker, who defined ‘management’ more closely than anyone before or sense, reminds us that without customers, no business can survive. Andrew Grove’s rule, that ‘only the paranoid survive’, stands as a salutary reminder against overconfidence. Henri Fayol’s insistence that management is about coordination of the parts to achieve a greater end remains at the heart of purposive management, and Joseph Juran’s 80-20 rule, or ‘Pareto’s Law’ which shows how 80 per cent of value is created by 20 per cent of people is proven right over and over again.

“Some come from broader spheres. The physicists who developed the concept of ‘time’s arrow’ and the law of entropy tell us that the status quo is impossible to maintain, that everything changes, while Charles Darwin and his colleagues remind us that in business as in life, those who survive are those most capable of evolution. Confucius’s golden rule, that we should treat others as we wish to be treated ourselves, reminds us of why justice and fairness are so important in business, and the ancient Indian sage Kautilya shows us how management is in fact a duty, not just a set of tasks to be performed.

“Ancient and modern, Eastern and Western, these are the people whose thinking still counts. They are the true gurus, the one’s whose teachings will never fade away. We can learn from them. Indeed, if we are to survive, we must learn from them.: (end)

I recommend you look into Management for the Masters – more information is here:  http://www.bloomsbury.com/uk/management-from-the-masters-9781472904768/ 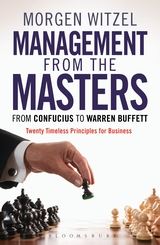 And if you would like to communicate with Morgen his email is: morgen@carucate.co.uk

More about him and his work can be found on his web platforms: